You are here: Home / News / Current Situation in Mozambique

In the interests of both our guests and investors, we have been carefully monitoring the situation in Mozambique and are in daily contact with the resort. So far neither the resort, nor any of our guests have experienced anything out of the ordinary that has disrupted any holiday plans.

Political Situation The first thing to remember is that Mozambique is a large country and can be divided roughly into 3 tourism regions: The South (Ponto do Oura – Inhassoro), the Central Region (The Save River – The Zambezi River mouths) and the North (Quilimane-Pemba). The resort town of Bilene lies in the South, as it is only 21/2 hours north of Maputo. None of the resort towns in the South have experienced any political unrest and it is business as usual for all resorts and lodges, including the San Martinho Beach Club™.

The reported political unrest is currently restricted to the province of Sofala in the Central Region. It is only here that the current Travel Warnings advise against travel on the main EN1 road to the city of Beira, unless within a military convoy. 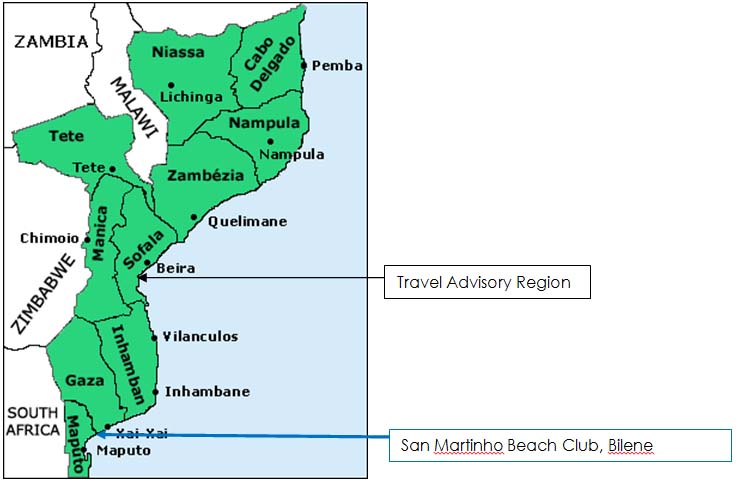 As you can see from the map above, this is well away from the Komatipoort – Maputo highway, which is utilised to get to Bilene. It is also widely expected that the two political opponents, Frelimo (the ruling party) and Renamo, will meet soon to resolve their differences in the interests of Mozambique

Reported Kidnappings in Maputo Whilst alarming, this is an internal situation and the targets appear to be wealthy Mozambicans who are released when a ransom is paid. Mindful of the negative publicity being generated and under growing public pressure for action, the Mozambican Government has launched a crackdown on these criminal elements and there have been numerous arrests.

Mozambicans are generally welcoming and friendly, if visiting Maputo, simply be vigilant, like you would in any city. As mentioned previously, we are constantly monitoring the situation and will not hesitate to contact all clients who have booked with us should the situation change.