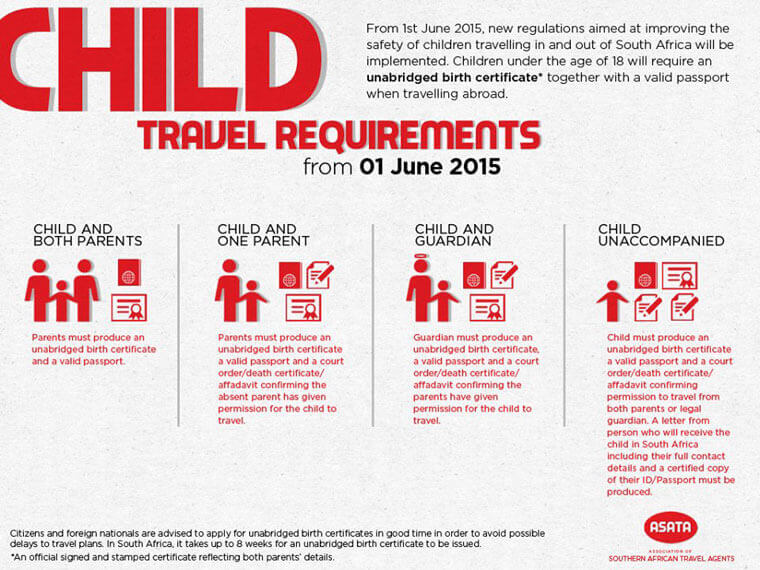 According to Department of Home Affairs, more than 30 000 minors are trafficked through South African borders annually. 50% of these victims are under the age of 14. For this reason, the South African government introduced a new immigration law that requires all children under 18 to have an unabridged birth certificate when travelling.

How Do I Apply For An Unabridged Birth Certificate? You can apply at your local Home Affairs Office by completing Form BI-24 (black ink only). The parent(s)/guardian should take along their identity documents, the child’s identity document (if applicable) and the child’s abridged certificate. The application fee is R75 and the process takes about 6 – 12 weeks. You can also read more about the application process here.

Child Travelling With One Parent An unabridged birth certificate needs to be produced as well as an affidavit from the other parent (who is registered on the Unabridged Birth Certificate), authorising the travelling parent to enter into or depart from the Republic of South Africa with the child he or she is travelling with.

If this is not possible due to whatever reason, the travelling parent needs to provide a court order granting full parental responsibilities and rights or legal guardianship in respect of the child. This will also be the case if the travelling person is the legal guardian of the child. If the second parent has passed away, a death certificate of the parent registered on the unabridged birth certificate needs to be produced.

Children Travelling With Relatives/Non-Relatives/Legal Guardians An unabridged birth certificate needs to be produced as well as an affidavit from the parents or legal guardian of the child confirming that he or she has permission to travel with the child. They’ll also need to produce certified copies of the identity documents or passports of the parents or legal guardian of the child and their contact details. The Director-General may, where the parents of the child are both deceased and the child is travelling with a relative or another person related to him or her or his or her parents approve such a person to enter into or depart from the Republic of South Africa with such a child.

Children Travelling Alone An unabridged birth certificate needs to be produced as well as a consent form in the form of an affidavit from the parents or legal guardian stating that they allow the child to travel into or depart from the Republic of South Africa. The child needs the contact details as well as copies of ID’s / Passports of parents. If one parent provides proof of consent, that parent must also provide a copy of a court order indicating that they have full parental responsibilities and rights over the child.

Who is exempt? The new law does not apply to children travelling domestically. It also does not apply to a ‘Cruise to Nowhere’. For example, a cruise that departs Durban Harbour and returns to Durban Harbour, or a cruise that goes from Durban Harbour to Cape Town Harbour. This is a summarised explanation of the law and does not deal with foreigners travelling to South Africa from other countries. The laws pertaining to this matter can be found under Immigration Act 13 of 2002, under Section 7 and Immigration Regulation 6 (12). Download the official document from the Department of Home Affairs on the requirements for minors travelling internationally.